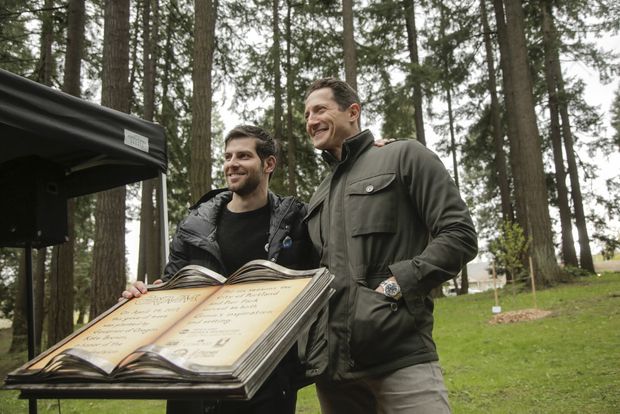 On April 14th, 2017, Grimm stars David Giuntoli and Sasha Roiz were at Pier Park in Portland, Oregon as part of a ceremony to honor “Grimm”, which filmed in Portland for six seasons and ended production in January 2017. Oregon Governor Kate Brown, Portland City Commisioner Nick Fish, and representatives from the Governor’s Office of Film & Television, Friends of Trees, Friends of Pier Park and Comcast/NBC gathered to recognize Grimm’s impact on the community, by planting three fresh trees “Grimm Grove” and a commemorative plaque, which resembled a book like on the show. Source: The Oregonian/OregonLive, Oregon Film

Take a sneak peek at some articles, videos, and photos (Source: The Oregonian/Oregon Live, Oregon Film) from this Grimm celebration.

Tim Williams opened the event right before the rain started and introduced David Guintoli (Nick Burkhardt, “Grimm”) who addressed the crowd and thanked the hard-working “Grimm” crew, Portlanders, Portland Parks and introduced Comm. Nick Fish. Fish then thanked cast and crew, and noted the amount of jobs created by the show and the sense of giving back to the community. Fish then introduced Governor Brown who spoke to the impact that “Grimm” (and other #OregonMade shows) have made on the local economy.

Cast and crew were invited to sign a replica “Grimm” guest book (made by Tim Oakley) and share their memories of the show and shooting in Portland. Darren Cools designed the fantastic plaque.

Before the official remarks, and the mentions of how “Grimm” provided 300 jobs year-to-year, directly spent some $300 million in Oregon, and how the Grimmster Endowment raised more than $1.5 million for OHSU Doernbecher Children’s Hospital Foundation, “Grimm” cast and crew exchanged hugs, jokes and sampled a colorful array of “Grimm”-themed baked goods from Voodoo Doughnuts.

Roiz, whose five-month-old miniature poodle, Bernie, was one of the big hits of the afternoon, tried a pastry decorated to look like the character of “Grimm” Rosalee (played by Bree Turner.)

“Oh, Rosalee,” Roiz joked between bites, “You’re just as delicious as I thought you’d be.”

Giuntoli reminisced about shooting what he estimated was 20 or more “Grimm” episodes in Pier Park. For example, the woodsy setting stood in for Germany’s Black Forest in the episode, “Into the Schwarzwald.”

“I got out my passport to come today,” Giuntoli joked, before fondly – maybe fondly? – recalling working in the park amid “a lot of mud,” and “a lot of rain.”

Read the complete The Oregonian/OregonLive article.

Yesterday's ceremony at a Pier Park commemorating 6 years of @nbcgrimm in Portland. A plaque was unveiled (inspired by the Grimm books) and trees were planted in Grimm's honor. It was and will always continue to be a privilege to have been a citizen of the beautiful City of Roses. We thank you. #pdx #PortlandProud

.@NBCGrimm will now forever be a part of Pier Park and #portland. Happy to be a part of today's tree planting and commemoration! pic.twitter.com/0kBRoiVoQv

Thank you Governor. It was an honor. https://t.co/R0wqJNQIrl

David Giuntoli, Sasha Roiz and a Friends of Trees pal at the #Grimm tree-planting at Pier Park in N Portland. pic.twitter.com/PuxsaUT0SG

Sasha Roiz and David Giuntoli in 'American Gothic' mode as rain falls after the #Grimm tree-planting event in PDX. pic.twitter.com/q08Aqgs5pA 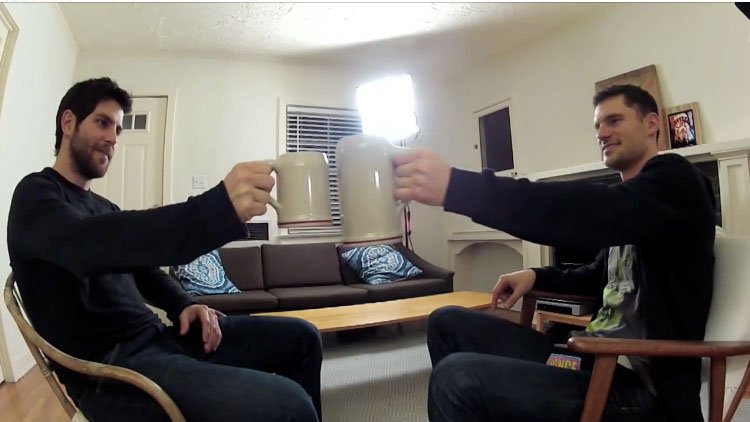