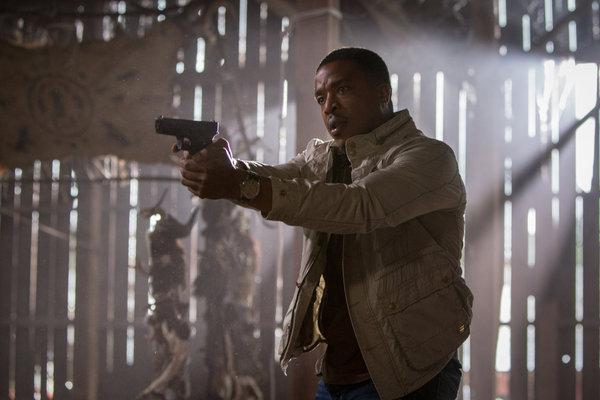 In this August 2012 interview, during a break from shooting Grimm’s episode 8 of Season 2, Russell Hornsby talked to Entertainment Weekly about the turning point for his character during episode 2×03 “Bad Moon Rising”, in which Nick is forced to tell Hank about the Wesen world and being a Grimm. Source: EW

ENTERTAINMENT WEEKLY: You’ve been part of a genre show for about a year now but haven’t really gotten to delve into the fantasy/horror aspects of it. How has it been to finally take the full leap into that side of the show?

RUSSELL HORNSBY: It’s actually comforting to know that Hank can now sort of be in on the whole deal, and I think it’s gonna make for a much more interesting and compelling show going forward. I think that it’s going to enhance the dynamics of our relationship between Nick and Hank, and I also think that it’s much more interesting for the audience to watch the character of Hank grow. Now it becomes a much more character-driven piece than it was just being a procedural for Hank. There’s real pathos now. And so there’s a lot more ways that the character can be affected by his surroundings than ever before. It’s what I hoped would happen, and it has, and so now it’s onward and upward and we can really just delve a lot more deeper into the show’s genre aspects.

How would you characterize where Hank is at the end of this episode – does he still have doubts about his sanity, or is he really starting to understand and accept that there’s this monster, Wesen side to the world he didn’t know about?

I think he wants to understand it. Now that it’s been sort of explained to him, he gets it. Of course there’s gonna be a lot more peeling of the onion, obviously, but I think he’s embracing it. I don’t think he’s skeptical. No more doubts and no more skepticism really. He’s curious, actually. I think he wants to learn and understand more. Him being a police officer, it’s one of those things where he realizes, “Well, then I haven’t seen it all. I guess there’s something else I have to learn.” What I’ve been told, talking to a lot of law enforcement people who were working during the ’80s and the ’90s, they said that they thought they had seen it all until crack hit. And they literally saw people turn into demons. So I have always compared it to that. I sort of use that analogy now. This is his crack. He thought he had seen it all until this, and now that this has hit, he’s saying, “I’m going to have to take a new approach to fighting crime,” much like people had to do for the crack epidemic. “We have to come up with a new way to fight crime.” For Hank – and for Nick too before – but now for Hank, there’s such a learning curve. But I think he’s embracing it.