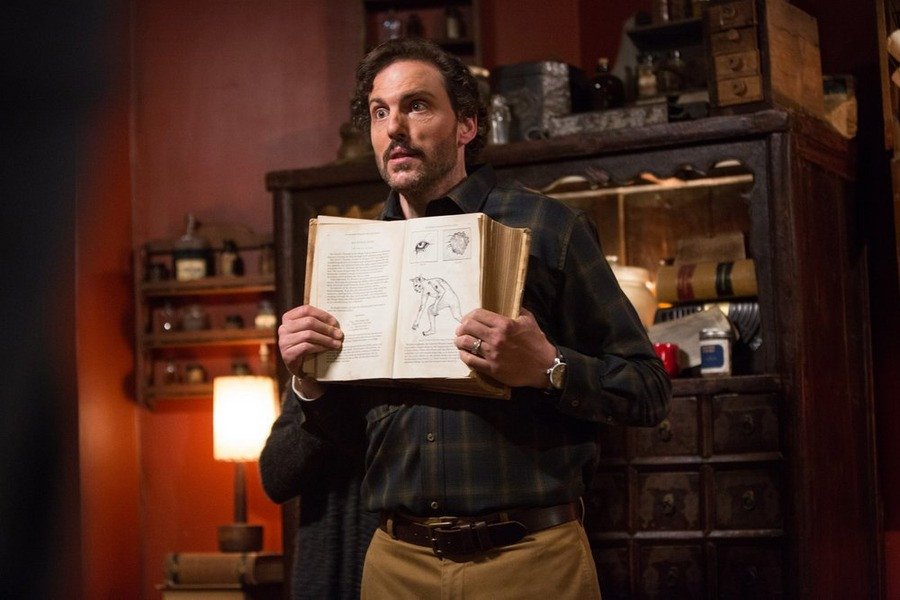 Grimm’s final episode for the year 2014 titled “Chupacabra” was an exciting one that incorporated a Latin American folklore urban legend in a Grimm way, and also continued many recurring storylines including Monroe and Rosalee’s inter-wesen marriage issues, Adalind, Sean, and the baby, Wu’s clues into the wesen world, and Juliette’s possible side effects from the potion-spell.

Despite that the episode was difficult to watch for animal lovers (a dog and a fox were killed), the episode balanced really well the case of the week to further the other character’s storylines.

It is great that the show keeps incorporating stories from other cultures, which helps the show maintain the fairy tale aspect still present so far. The first scene where the neighbor and his dog were killed was truly surprising. I was glad that Diego, the doctor, did not kill anyone else after that, even if he tried, because despite the disease he caught, he was still a good guy. This was probably had a very tragic resolution, but a noble one, where the doctor saved his wife, but decided that he should die.

This case was strongly tied to Wu getting closer to the wesen truth.

Sergeant Drew Wu finally confronted Nick and Hank about everything after Sgt. Franco and he saw the Chupacabra. Finally, maybe a little too late, Nick and Hank decide to tell him the whole truth, but as they were explaining about Trubel’s involvement, the doctor’s wife was attacked. Now, Wu encounters another creature that he can’t explain, and leaves the scene before Hank and Nick can’t calm and explain everything.

This was a really strong Wu episode, in the same way as last season’s episode “Mommy Dearest”, where we saw the Aswang, also written by Brenna Kouf. Reggie Lee was excellent in this episode. Hopefully, Nick and Hank can now help him.

The honeymoon is over, and it even has not started yet. Monroe and Rosalee’s inter-wesen marriage issues turned more aggressive, when Rosalee received a phone call, where someone threatened. After that, she found a dead fox in the spice shop, probably sent by the Secundum Naturae Ordinem Wesen, the ancient organization founded during the middle ages to keep Wesen pure. As Nick kept investigating the suspects that Trubel gave him, Monroe’s anger was reaching new levels. But now the Wesenrein (the other name for that wesen organization) captured Monroe at the end of the episode. The police officer in charge of keeping them safe, is part of the Wesenrein.

We can’t wait the moment Nick finally confronts this organization for Monrosalee, and the poor fox who was killed to scare Rosalee.

Sean Renard and the Resistance

After a conversation with Tavitian, Sean joined the Resistance to find baby Diana. Now we have Adalind and Prince Viktor in one side, and Sean and the Resistance in the others. Who will find the baby first? Will this storyline let us see the return of Kelly Burkhard, Nick’s mom, and Elizabeth, Sean’s mother?

An unexpected side effect for Juliette

Apparently, it turns out that Juliette is not pregnant. But those pains come from something worst. Juliette woged into a Hexenbiest, the same creature that Adalind, the woman she hates, is. This was an unexpected twist in the storyline. Will this be a permanent change for her? Is anyone excited for the inevitable confrontation between Adalind and Juliette, even now that the show has two Hexenbiests?

As the final episode of the year, it left us with so many cliffhangers. It’s going to be a very long month until the return of Grimm on January 9th. How will Wu react to everything when Nick and Hank finally tell him? Will Juliette’s Hexenbiest side be permanent change and how will Nick and the Grimm team react to it? How will Nick save Monroe, as a Grimm or a cop?