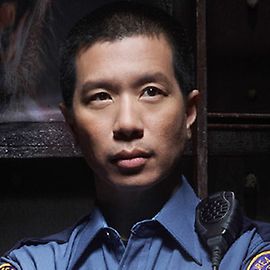 Den of Geek chatted with Grimm’s Reggie Lee (Sergeant Wu) about season 3, upcoming Wu storylines, working on Grimm, and more. Here’s an excerpt of the interview. Source: Den of Geek

We understand there’s going to be an episode that focuses on Wu this season?

I have shot several of [the episodes] already and I can tell you… while I was shooting them I was tired, frustrated and fulfilled at the same time. It’s interesting because Nick’s character has so much to do every episode, and the emotional part spans the entire season. But then they say ‘we’re going to throw all this emotion at you, and it was just draining but it was probably some of the most fulfilling work I’ve ever done in my entire life. I’m a tough critic on myself, so I can say it was so worth it; I think the fans will be really happy with it.

You’ve worked on television series before. How does Grimm compare?

Very few actors are afforded the opportunity to sit in a show for at least three seasons. I’ve done other series but not for this length of time, so it’s been great to sit with this character. It becomes a real part of you and you also find so more depth, which is like the dessert for an actor. Unless you’re doing a film when you have so much time to prepare, you don’t get that, so it’s fantastic, I’m really grateful for the opportunity. For me that’s the real difference in terms of my career.

The other great part is that the cast is ridiculously close. It’s like being in theatre. I’ve done shows on Broadway for a year and a half and you form life relationships, and that’s what’s happened here. But when you’re on set, you’re talking so much to each other and just philosophising on life for hours on end, it’s hard to pull yourself away! Especially in the precinct scenes and you have Russell (Hornsby), David (Giuntoli), myself and Sasha (Roiz), we could stay there forever. But that’s such a gift. I couldn’t be more thankful to the folks at NBS for continuing this little show.

Read more about Wu’s personality, the fans of Grimm, plus more.