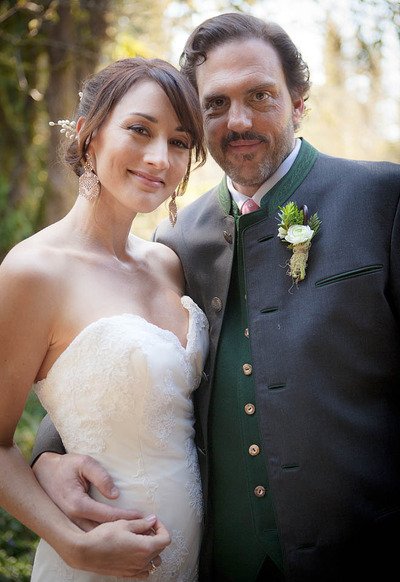 Kristin Turnquist from OregonLive visited the set of Grimm as the cast and crew were filming the season three finale “Blond Ambition” which airs May 16th 2014. Check out some behind the scenes scoop as the show films the wedding scene. Source: OregonLive

Check out an excerpt of the article.

As rehearsal begins, Mitchell solemnly walks from the rear of the room toward the altar, then does a comical stumble over a small step, as the other actors crack up.

Turner descends a rough-hewn staircase on one side of the room, and walks to the altar. “I’m legitimately nervous,” she says.

After the rehearsal, the actors disperse to wait until they’re needed for filming. Upstairs, Monroe and Turner take a break, joke around, and confess to wedding jitters.

Turner says she’s happy that Rosalee gets to wear a glamorous, strapless white wedding gown, as opposed to the heirloom garment the character was supposed to wear. That particular costume was a bit, well, frumpy.

“I would say ‘frumpy’ is a kind word,” Mitchell chimes in.

“We went properly bridal shopping in downtown Portland,” Turner says, to find the dress. After a quick consult with one of the wardrobe crew, Turner says the dress came from AniA Collection.

The wedding is “a big deal,” Turner says, “so I thought more of a show-stopper dress was appropriate,” especially now that Rosalee has fallen in love, and is embracing more of her feminine side.

As for how Monroe is feeling about getting married, Mitchell says, “It’s just ‘Pinch me, is this real?’ That’s the basic thing.” Monroe –- a Blutbad, or werewolf-like Wesen –- has evolved since “Grimm” began.

Read more behind the scenes scoop with the cast and crew of Grimm.