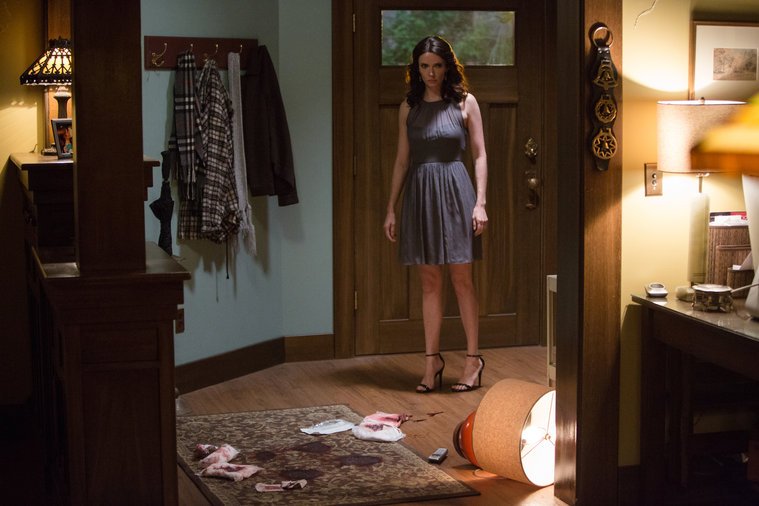 Zap2it talked with Bitsie Tulloch, who plays Juliette Silverton on Grimm, about the consequences in Nick and Juliette’s relationship after the events of the season 3 finale, plus a big twist with her character. Source: Zap2it
Here’s a sneak peek into the Zap2it article.

Zap2it: What are your thoughts on the turn Juliette and Nick’s relationship takes in the Season 4 premiere?

Bitsie Tulloch: Juliette has just been tested by all this stuff for years that’s kind of unwelcome and has come into her life via Nick being a Grimm. On some level she was psyched to finally be included, but this whole thing about sleeping with Adalind inadvertently I think is just too much for her. She’s just over it. Then she realized once they’re leaving the wedding that Nick has lost his powers as a Grimm, so for her all of the sudden that’s his life raft. She’s thinking, “Well, wait a minute. If you’re not a Grimm anymore, maybe there’s an opportunity for us to have a normal life, and maybe this is something I could get over as long as you’re OK with not being a Grimm anymore.” There’s definitely a lot of drama. It’s hard to ask somebody to be understanding about because it’s so wrong. Sex seems to be the crossing line where it’s just too much for her. Right now, going forward, it’s really about whether or not she’s even interested in staying in the relationship at all.

How much do you think she holds against him the fact he didn’t realize it was a different person pretending to be her?

A lot. Obviously there’s not always time to delve into a character’s innermost thoughts, but she is probably thinking, “How would you not know? She had to at least have been a little bit different from the way we usually do it. So how do you not know it’s not me?” But on the other hand it sounded and looked exactly like me.

Is this season going to be more serialized than the ones before?

I’ve definitely seen that happen a little bit more. I just finished shooting episode 8 yesterday, and I noticed that happening more as opposed to episodic, because they’re getting bigger and you can’t really wrap it up. The stuff is getting more intense. The show looks darker, and the storyline is definitely getting dark and heavy. I think it’s really fun for the series regulars because everyone’s having really intense, more dramatic stuff to do this season. That goes across the board. I’ve definitely seen it be a little bit more serialized where we’re having more cliffhanger-type endings. You’re probably going to see a bit of both.

Are there any other parts of this season that you’re really excited about?

There is a twist in my character that’s coming around episode 7, 8, 9. The fans are going to lose their minds over it.

Has it been telegraphed at all? If people pay close attention, will they notice it coming?

Not really. It’s pretty crazy. I hadn’t read that script yet, and Bree [Turner] called me and said, “Oh my god, have you read the end of episode 4.07?” And I was like, “No, what? I’m walking my dog,” and she said, “Go home and read it!” What! No way! I don’t even think that episode airs until right before Christmas.