NBC has released two new sneak peeks of the fourth episode of Grimm‘s season four titled “Dyin’ on a Prayer”. In the first clip, Nick and Hank discover that they are facing a mythological creature. Source: SpoilerTV


Grimm – Golem of Interest (Preview) Nick and Hank come to grips with facing a mythological murderer on Friday’s all-new Grimm, 9/8c on NBC. 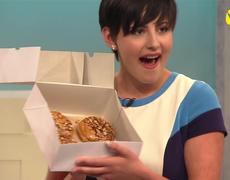