“Dyin’ on a Prayer”, written by Sean Calder, introduced us to a new creature, this time from jewish religion, which is called a Golem. It’s great when the show uses different real sources (folklore, religion, fairytales) of inspiration, which makes the Grimm world feel a little bit more true and relatable to our real world.

This episode had probably season four’s most interesting creature so far, called Golem, and probably ranks as a favorite of all time among Krampus and El Cucuy. The three of them are creatures that actually go after the bad guys, so they aren’t exactly the villains.

Monroe and Rosalee are friends with Nick, a Grimm, which is not a normal or popular relationship to have in the wesen world. However, their biggest problem relies in the inter-wesen marriage. Apparently, there’s hate in the wesen community against this wesen relationships, which is why the mysterious masked guys from the end of the previous episode (“The Last Fight”), threw a brick into the Spice Shop. I really liked that the episode showed us how Monroe is extremely positive about the incident, but Rosalee is the realistic one. Are they in danger? And how can Nick help them without this Grimm powers?

This was an interesting storyline, because there were some fun moments between Rosalee, Monroe, and Elizabeth, Renard’s mother. There was great tension, tas they felt a little bit uneasy with Elizabeth. The best scene was Elizabeth as Adalind trying to trick Monroe and Rosalee. I really liked how much Rosalee was enjoying and learning from Renard’s mother.

Finally, they found the way to restore Nick’s powers, but it requires Juliette’s participation. What does she need to do or go through?

Golem, a monster made of clay

The case of the week was really exciting. First of all, the show used a jewish folklore story. Ben, Sarah, and David Fisher were really engaging characters.

The storyline’s resolution was satisfying because it allowed David to be the hero, and his mother Sarah to finally believe his brother Ben about Golem. Poor Nick had to yell at the little boy to lure the monster, but somebody had to do the hard work. This storyline showed how the Grimm abilities aren’t always useful.

Not much happens with Adalind’s storyline. However, it’s always funny to watch her complain about everything, which is why the character is enjoyable despite her many terrible actions. In this episode, she’s almost drowning, and in the last two episodes, she shared her dungeon cell with rats. Adalind’s life is not so great at the moment.

This episode continues with the current trend to end with a cliffhanger. What will happen in the next episode? Will Juliette help Nick to restore his powers and will Nick let her do it? How dangerous will it get for Monroe and Rosalee? What will Sean Renard do about Wu’s suspicions about Trubel and Nick? 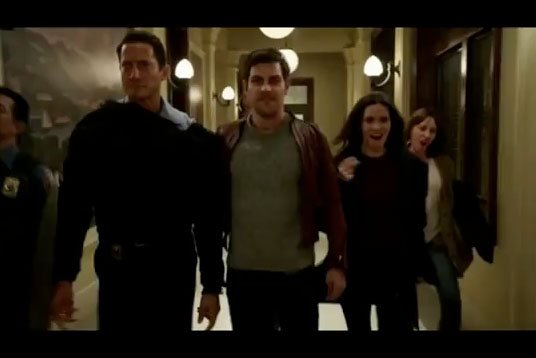