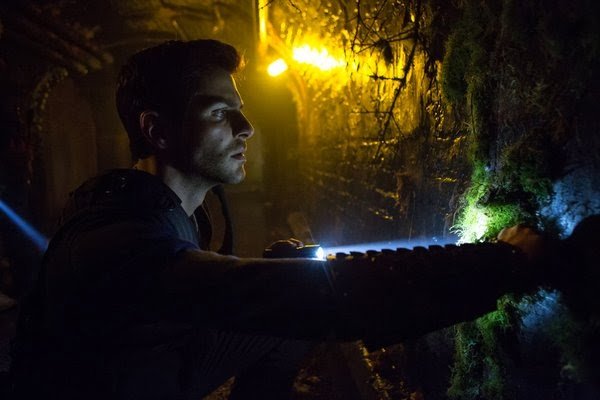 Grimmsters received an early Christmas present on Friday the 13th, when NBC aired two new back-to-back episodes. The first one, titled “Cold Blooded”, featured a new wesen called Gelumcaedus, an alligator type of wesen that lived in the sewers, a storyline that was first hinted during this year’s Comic-Con 2013.¡

One thing that the episode was lacking was Monroe’s involvement in this storyline. He only explained Nick about this wesen, but he could have been helpful with his smell when Nick and Hank were tracking them in the sewers.  Also, the fact that the Gelumcaedus were collecting clocks could have been a great parallel with Monroe’s job with clocks. This season is seriously lacking Monroe and Rosalee in the action of the show. Hopefully the writers can continue to develop the Monroe and Rosalee’s relationship without sacrificing their involvement with Nick and the wesen episode storylines.

It still was a good episode, especially for Nick’s enjoyment for the Grimm history and the Grimm gang interaction. Also, it’s great to watch the Vienna and Royals’ storyline moving forward. In this episode, we saw the introduction of Alexis Denisof as Prince Viktor, who is revealed to be spying on Adalind. He will surely make a great villain for the season.

Nick’s new weapon was pretty awesome. Throughout the last two seasons, Nick’s weapon of choice was his crossbow, so it was exciting that the writers finally introduce a new weapon for Nick that can cause some serious damage. Let’s face it, Nick looked really cool with the weapon, a really cool Grimm.

Wu was hilarious in this episode, specially the scene where Nick and Hanks leave him alone in the sewers and he finds a not so nice surprise. It’s Jimmy’s leg!

Love the flashbacks featured in the episode. Great callback to season one episode “Game Ogre” and Zombie Nick in this season’s episode “The Ungrateful Dead”. It’s nice to see that Nick is still affected by his zombie actions, and that the moral consequences are still present in Nick.

I really enjoyed the fight sequence between Nick and the three brothers, plus Hank’s help. Nick is becoming a force to be reckoning with.

So grimmsters, how does Cold Blooded ranks on your favorite Grimm episodes? Did it makes the list? Did you enjoy the episode? Share your thoughts 🙂 3×14 – Mommy Dearest: Wu Comes Face to Face With Something He Can’t Explain