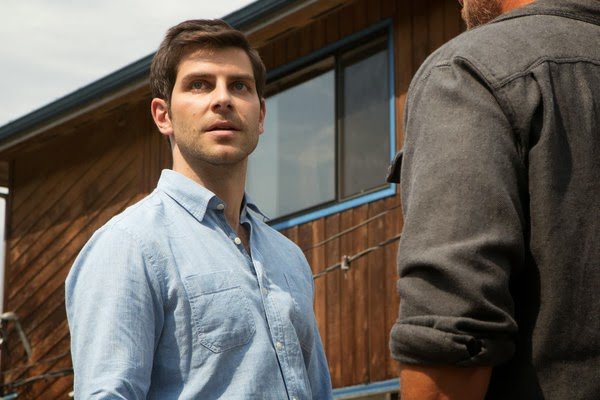 ThreeIfBySpace got to chat with the star of Grimm, David Giuntoli, who gave them a little insight into the upcoming Grimm Christmas episode and what Nick’s been going through in Season 3. Source: ThreeIfBySpace

Take a sneak peek at the ThreeIfBySpace

First, I have to say, I really loved the finale, especially the Krampus episode. It’s nice to see something completely different for a Christmas story.

Who knew Santa had horns?

Yes. Who knew? Obviously, most of the stories are based on fairy tales and folklore and, but recently you had the episode with the boy who seemed to be possessed originally (Stories We Tell Our Young). Do you like that they’ve done something different? Are you looking forward to more of that, or do you prefer the more normal-type folklore stories?

Well, I think that kind of throws a curve ball into what the audience is expecting is good for the show. I think that what we’ve done on Grimm is originally I was passed a book that had all these fairy tales in it, and that was what our episodes were based on.

But as the show grows, as does the character Nick, and you discover that some of these other phenomena that take place in the world haven’t yet been added to the book of fairy tales, but they are being added by Nick now. So we are taking other myths and folklore and otherwise just kind of stories that have been told and putting the little Grimm spin behind them now, so I enjoy that.

The first part of the finale is about alligators in the sewers, and obviously that kind of plays on you know a childhood fear of some people. Is there aything like that you were scared of when you were little?

I get this question so much. What was I afraid of? I was just afraid of ghosts. I couldn’t handle the thought of them and I felt constantly watched and it was like the worst thing in the world. But no, I didn’t have the fear of that – of creatures coming in through the toilet.

What is the hardest thing your character has been has had to deal with in this series in terms of the Wesen?

Krampus is pretty wild. When I walked onto set and I saw the actor dressed… first of all, we hired a gigantic guy to play this character. And then when I saw him as Santa with these horns, I actually had a visceral reaction to him. I was kind of frightened in a way. It was a disturbing thing.

Some of the grossest things I’ve seen are the corpses when they’re all set and bloodied. The craziest thing I ever saw was walking on the set and seeing in a car a body being eaten alive from the inside by live rats, and rats were pouring out of this mouth of this dummy and it was awful. And my colleague Russell Hornsby ran away like a scared little boy.

There’s some other stuff too. I think the most difficult thing for me was the initial discovery that I was a Grimm and that this whole other world was out there. It’s something we play on in the series a lot. Whenever anybody else finds out who’s not ready to find out about the world of Grimm, it’s very delicate because mental institutions are lined with people who weren’t ready to see something, and they did.

Are you referring to a regular character?

Hey, who knows? Who knows? It’s a teaser. We’re filming an episode right now where somebody else sees something for the first time.

In the first half of Friday’s season finale, a lot of it takes place in the sewers. Did you guys actually do some shooting down there in Portland?

Yes, we did actually. We did some trickery, of course. We went into an actual sewer in Portland and then we shot on a sound stage that we built a sewer on. But yes, I got to look like a actual man for once in my life and had a little sewer suit on. Little hard hat. Got my little soft city hands down a ladder into a sewer.

Nick went through a big change at the beginning of the season with becoming a zombie, and there’s some… residual effects. Are we going to get more of that as we come back after the break?

Oh, yes. Yes. We’re going to be playing on this one for a little while. It’s funny. Every time Nick gets harmed, he’s left with a kind of useful side effect, and we’re going to definitely be seeing more of that after the break.

Grimm has kind of moved from a niche show – and there’s nothing wrong with being a niche show – but it seems to have gone from niche to slow build. Have you sensed any of that at all?

Yes, that’s a really good question. I have noticed that, and I don’t know if it’s completely based upon the fact that the show’s been on the air for two years now, so more and more people have encountered it just based on that.

But I’ve noticed when you’re an actor, or maybe if you’re you guys – I don’t know if you pay attention to this stuff as much, but right after we air it, the next morning it’s like, “Oh, what’s our rating,” you know?

And it’s funny – our demographic is staying more or less the same – but the total amount of viewers has been going up. Like this last episode we’ve had, it was the most viewers we’ve had since the pilot, and that’s kind of a trend.