“El Cucuy”, or “El Cuco” as we know it where we live, is a well-known latin folklore legend that latin people have heard when they were children. As soon as we heard that Grimm was going to incorporate “El Cucuy” into an episode, we were really excited how the storyline was going to be. Grimm didn’t disappoint. “El Cucuy”, written by Michael Golamco, was an excellent episode filled with great, scary, fun, exciting moments, plus great character interactions. It is probably one of our favorite episodes of Grimm.

For us, the episode made us root for “El Cucuy” who was seeking justice. When you read and listen to the news about all the violence and crimes in the city and in the world, and that the bad guys are walking free in the streets, it’s makes you wonder what would it really be to have a vigilante like “El Cucuy” in the real world. Bad guys would probably not do bad things if they knew someone would make them suffer.

The clear suspect for being “El Cucuy” was probably David Florez (Manny Montana), a soldier who returned with PTSD and is upset that the police do not stop the violence in the neighborhood. However, the episode provides us with a great twist at the end when it is revealed that “El Cucuy” is actually Mrs. Garcia (Gina Gallego), the old lady who appeared in both crime scenes. The reveal was unexpected and funny at the same time, specially how Mrs. Garcia tries to explain that no one is going to believe that she did it and the surprise faces of Nick, Captain Renard, and Hank about the reveal.

The other storyline in the episode was Adalind’s ultrasound. It looks that this pregnancy is not normal. Two heartbeats? No twins? When Captain Renard saw the ultrasound, he seemed emotionally connected, so it will be interesting to see him encounter Adalind again. I think that he will look for her very soon.

The last storyline involves Monroe and Rosalee’s issue with their families finding out about their relationship, which comes to light when Monroe’s mother calls him and Rosalee answers. The inter-wesen couple relationships is an interesting topic to explore with our favorite wesen couple, so it will be exciting to watch their families’ reactions and learn more background into Monroe and Rosalee’s dark past that the show had referenced in past episodes.

The scene where El Cucuy is killing the first two bad guys was really well done. Really liked the way it was shown on screen, by seeing the perspective of El Cucuy when chasing the second bad guy.

The ending of the episode, which unveils the real identity of “El Cucuy”, was really great. Love the twist in the story. The last interrogation scene was hilarious: Mrs. Garcia’s explanation of the blood in her clothes and the shock and surprise faces of Nick, Hank, and Captain Renard, knowing that they just have to let her go. Plus Nick’s face when he first discovers that “El Cucuy” is Mrs. Garcia is awesome.

The dinner scene between the Grimm gang (Nick, Monroe, Rosalee, Hank, and Juliette) showed how much fun the whole dynamic between the characters is now that almost everyone knows about Grimm and the wesen world. Discussing murders while eating like it’s just a typical conversation topic can only happen on Grimm. The scene also shows that every character can contribute in their way to help analyze the case of the week.

Nick and Juliette’s relationship has become a really interesting part of the show now that there’s no secret between them. Juliette’s reaction about Nick’s mom being alive felt real, and I’m thankful that the “M” e mail issue was not used to create drama between them, but to finally make Nick come clean about her mother and explain Juliette about what happened during her coma. It was nice to see some past characters return to the show. In this episode, Pilar (Bertila Damas) explains to Nick and Juliette about the legend of “El Cucuy”, which gave the episode a nice background that this being has been in other places. Juliette’s excitement in Aunt Marie’s trailer was cute and it is probably the type of reaction that the viewers would have if they were in the trailer exploring and reading all the books.

Nice continuity by showing Monroe doing Pilates, which we have not seen onscreen since season 1 episode 2 “ Bears will Be Bears”. I hope that we see Monroe playing the cello in an upcoming episode, with Nick and the gang singing with him. It would be a hilarious scene.

We did not find out if “El Cucuy” is a wesen. I like the fact that it was not answered, similarly to last season’s episode “La Llorona”, which also was based in a latin legend.  Juliette suggested that maybe “El Cucuy” was not a wesen. Hopefully we get to see Mrs. Garcia as “El Cucuy” back again on another episode.

I really enjoyed Juliette being really excited about her research of Nick’s mom location.

(After researching about Nick’s mom and drinking lots of coffee)

Nick: Hey, I thought you were asleep.

Juliette: (Really excited) I can’t sleep, not with all that is going on.

The entire dinner scene was great. Love to see the whole gang enjoy a normal dinner while discussing crime photos.

Monroe: There’re no signs of going after the legs first to cripple the prey… Sorry, victim.

The scenes with Mrs. Garcia, the old lady who is really “El Cucuy“ were really funny.

(While getting really close to Nick)

Mrs. Garcia (El Cucuy): I hope you don’t mind, but I don’t get many handsome young men visitors anymore.

Mrs. Garcia (El Cucuy): I know it looks bad, but do you really think anyone is going to believe that I could do such things?

Hank: You have Bolton’s blood all over you.

Mrs. Garcia (El Cucuy): Well yes, you brought me to Mr. Bolton’s house and when I heard the terrible screaming, I went in to help. Oh! I must have gotten all bloody when I tried to save him.

Nick: Save him? Really?

(After watching Nick and Hank interrogate Mrs. Garcia “El Cucuy” about the murders)

Captain Sean Renard: Are you kidding me?

Definitely one of our favorite episodes. So what do you think about “El Cucuy”? Did you enjoy it as much as we did? Share your thoughts and comments with us, we would love to know your opinions on the episode. 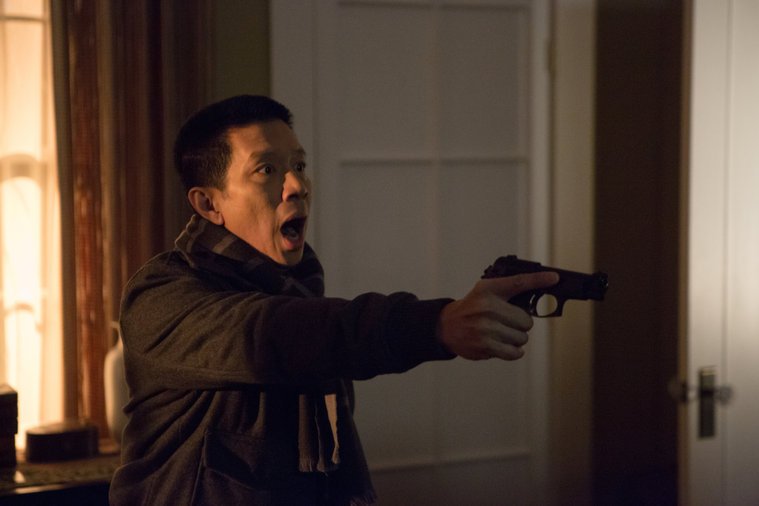