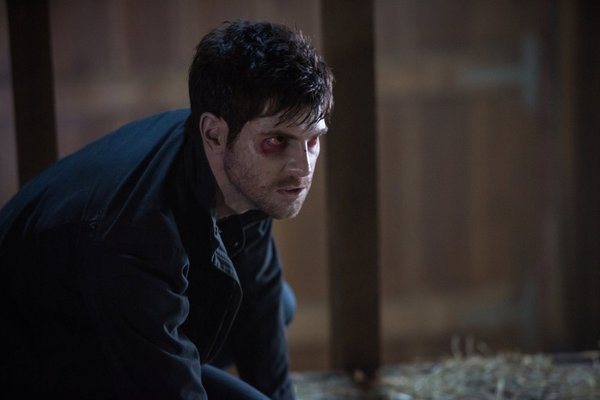 PTZD picks up exactly where the season 3 premiere left off: Zombie Nick staring at a family entering their house. That doesn’t sound good for our hero! If “The Ungrateful Dead” was full of action with the zombie storyline, “PTZD” is a combination of action plus great character development for our Grimm gang. Zombie Nick was not easy to control. Five people were needed: Captain Renard, Hank, Monroe, Rosalee, and Juliette.

After a really long and hurtful bumps for Nick’s friends, with the guys doing the fighting and the girls giving the antidote, our hero seemed to leave his zombie life into the past. But wait?… It’s not that simple for a Grimm. Nick keeps dying in his sleep and turning grey when he has intense emotions, plus his super hearing (with the first glimpse we got in season 2 episode 15 “Mr. Sandman”) is developing. These zombie consequences for Nick are really interesting to see into the next episodes of the season, not only the physical ones but also the moral ones that happened due to one guy dying at the bar.

So Eric Renard is dead.  But still, I don’t completely believe it. It seems like a great opportunity that Eric faked his death (he has power and money) and is waiting the right moment to emerge again. If we don’t see a body, there’s always a chance that he is alive.

Things I loved about the episode:

Captain Renard: Are you ok?

Hank: I wish I could do that.

(After getting hit by Zombie Nick)

Hank: Are you ok?

Juliette: No, that hurt, but I got to feel better than you guys.

(Adalind finishes the sewing of Frau Pech’s body with disgust)

Stefania: That’s enough. Cut the thread with your teeth and tie it off.

(Adalind looks at Stefani with disgust)

(Adalind tries to cut the thread with her teeth)

(In regard to Eric’s death in a car explosion)

Newscaster: All of Vienna is in mourning.

Captain Renard: All of Portland isn’t.

Nick: Now that is a bad headache.

So those are a few of our thoughts about PTZD, the final wrap of the whole zombie storyline. You read our review now we would like to hear from you 🙂

So what do you think about PZD? What were your favorite moments? How do you think Nick will deal with the fact that zombie Nick killed someone? Do you like the new dynamic with the whole Grimm gang? Share with us your opinions.